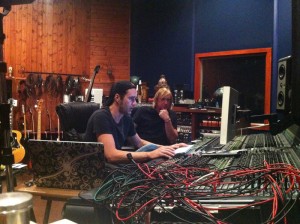 My favorite thing in the world is creating music! The composition and creation is always so magical. Sometimes it seems to flow out of me from some divine source of inspiration and other times I sweat and struggle over every note.
The greatest part of musical creation though is the actual recording process. To hear the music become something bigger as a whole as the different instruments and layers unfold is like an amazing spiritual alchemy to me.
I have a Pro Tools studio in my home that I do the majority of the initial recording of tracks with. I often have other artist’s like my LPJ and RRO bassist Michael “Bones” Gerbino come to my studio to record their individual tracks. Also I send my keyboard parts and my demos of songs to other artists ( usually the various drummers and guitarists that I invite to perform on a particular piece) and they then send me back their recorded performances and I mix their parts into the recording and complete the piece and do the final mix and mastering process.

I currently do some of the mixing with vocalist and producer Paul Shortino in his studio and I often also work with Vinnie Castaldo at The Tone Factory in Las Vegas where I’m able to bring in string players for the BIG Renaissance Rock Orchestra pieces and for final mixdown and mastering.

I am currently in the process of completing a RRO piece called “The Author Of Mystery” on which Whitesnake/Billy Idol drummer Brian Tichy has joined RRO by doing the drums in his own studio in LA while Phoenix guitarist Steve Conley recorded the guitars. This is a massively huge and energetic rock piece with strong prog elements and will have vocals added to it next! I look forward to releasing this RRO song as it will be the first RRO song to have vocals, which were also written by myself! I look forward to announcing soon a well known vocalist who will be adding the final touches to “The Author Of Mystery”!

As the mix and vocals continue on “The Author Of Mystery” I am moving forward with another piece called “Alexanders Symphony”. This is the 3rd instrumental RRO number and will be released on a 3 song instrumental CD called “The White Gate Trilogy”. I’m excited to announce that I’ve just received confirmation that Slash drummer Brent Fitz will join The Renaissance Rock Orchestra on this song!

I also will be going into Capitol Records in Hollywood August 19th to record the second Louis Prima Jr. and The Witnesses CD. We will be recording an entire record of originals for Warrior Record / Universal Music distribution. the best part is we get to record this one in the legendary “Studio B” where Louis Sr. recorded much of his catalog! This promises to be an amazing and historical experience as we release the first original Prima music to be released in 40 years!